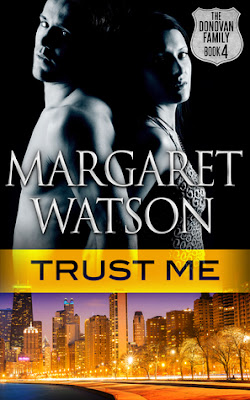 Raine Taylor has one goal – justice for her murdered sister. She knows Genie's husband strangled her and left her in an alley – Peter had been threatening to kill his wife for years. The police said there was no proof Peter Northrup killed Genie. So it was up to Raine to make him pay. When Detective Connor Donovan answers a call about a trespasser outside Northrup's house, he finds a woman running down the street. When he tries to stop her, he's left holding her hoodie as she strikes out like a ninja then vanishes like smoke. Connor quickly realizes Raine is his mysterious trespasser. Now he has to figure out why she was outside Northrup's house at three A.M. Raine isn't his usual criminal – she's a schoolteacher who coaches a tae-kwon-do team of under-privileged girls. And he's wildly attracted to her.Raine needs to stay away from Connor. She has a plan to deal with Northrup, and she can't get involved with a cop. But like two magnets drawing together, she can't resist him. Can Connor help her find justice for Genie? Or will her sister's killer claim another victim before they can stop him?

I am quickly becoming a fan of Margaret Watson. Her story telling is well paced. The suspense elements do not drive me crazy (I'm usually not a fan!). And she writes characters that are interesting to read.
This is Connor's story. He is the third the brothers to find his true love. Connor is a Chicago Police Detective and randomly offers to help his tired sister out by going on a call to a potential prowler. What a can of worms that move opens. He meets Raine and she immediately gets under his skin.
Of course neither of them are looking for any type of relationship. The best things often happen to those who least expect it. As they work together to solve her sister's murder, they both realize there is more than just physical attraction happening.
I like that the author brings back the support of the family in each of her books. They always have each others backs. Great story of loss and true love. Looking forward to more in the series.
*Copy received from the author for an honest review. 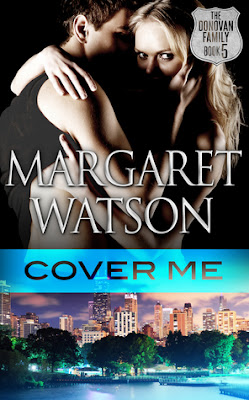 Chicago cop Brendan Donovan loves the adrenaline rush of his role on a tactical team. So when he's assigned to an undercover job to ferret out the supplier of a new and deadly sex drug, he's thrilled. His partner is Cilla Marini, a detective he'd met recently during a traffic stop. He's intrigued by Cilla, but his sister told him that Cilla doesn't date cops. Which is exactly what they have to pretend to do. Brendan loves a challenge.

Cilla is shocked to find out that Brendan is her mystery partner. After an incident that forced her to transfer from her district and isolated her from her fellow cops, Cilla knows relationships with cops are off the table. But she's spent far too much time thinking about Brendan since he pulled her over for speeding. Now, not only are they working together, they have to pose as a couple to find the source of the sex drug that's already killed several men.

As the action heats up, Cilla and Brendan don't have to pretend they want each other. But when secrets put them both in danger, will they have each other's back? Or will their quarry divide and conquer them before they can find their way to happily ever after?

Cover Me  5 hearts
This is another great story in the Donovan family series. Brendan is the last brother to hold on to his play boy single status. The rest of the family teases him, but he gives as good as he gets. What the family doesn't know is that most of Brendan's actions are bravado--trying to live up to who he thinks they want him to be.
Brendan is reckless and carefree. This makes him excel at undercover work. He meets his next partner initially as he pulls her over for speeding. He immediately takes notice. Cilla has a rull about "no Cops". so she writes him off. As they are thrown together undercover, they take pretending to be interested in each other to academy award winning levels.
Cilla and Brendan each have so many layers to them. They have protected their hearts for so long. When they can't fight the attraction any longer, they cross all the lines each has laid down. Their feelings come into play and then of course, things always go off the charts in directions only the author can imagine!
I am completely hooked on this author! I am not usually into this genre, but Margaret has made me a fan. I bow to her skills as an author. Thank you for bringing us the Donovan family along with all the anxious feels associated with fighting the bad guys. I am a fan!

*Copy received for an honest review

Margaret Watson
Once upon a time, there was a little girl who dreamed of writing books just like the ones she loved to read – Nancy Drew, The Black Stallion, Lad, a Dog (that love for animals that made her become a vet), Mary Stewart, Helen MacInnes,  Georgette Heyer  (the little girl was getting older).  She made up stories and changed the endings of books and movies to make them come out the way she pictured them.  But instead of pursuing her writing dream, her love of animals and need for a ‘real’ job led her to a career as a veterinarian.
When she realized she was now making up stories about her clients and their pets, she decided to try writing them down.  Her first book, Personal Best, was published in 1991.  Thirty award-winning books for Silhouette and Harlequin followed.
Today, that little girl considers herself the luckiest woman in the world.  She has two careers she loves as well as the best family ever.  She and her husband have three daughters and live in a Chicago suburb with a menagerie of pets.
To find out more about my story, signup for my newsletter.   Or check out my photos.  Or read excerpts from my books.  If there’s something on my mind, that’s fit to print, you’ll find it on my blog.