Country boy and city slicker. Cowboy and decorator. Bull rider and — unicorn!  Opposites powerfully attract in Tara Lain’s new romance, but can they find a way to be together? Check out Cowboys Don’t Ride Unicorns. 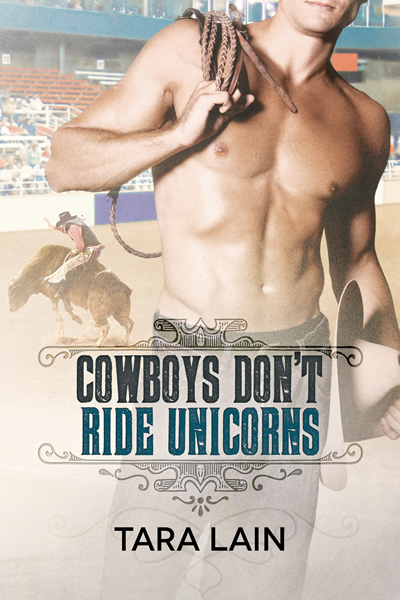 Cowboy Danny Boone—a name he made up one drunken night and has regretted ever since—harbors a big past and yearns for a small future. A short, bright career as a champion bull rider almost ended in his death when his homophobic father discovered Danny was gay. Now Danny longs for a plot of land he can build a ranch house on and enough money to make up for some of the education he missed.

Danny also hides a preference for beautiful femmes who like to top—a combo rarer than a unicorn. Then onto the guest ranch where Danny works drives San Francisco decorator Laurie Belmont, a young man so gorgeous he makes horses gasp, and so ballsy he almost kills Danny’s attacker.

Laurie’s trying to find his way out from under the thumb of a domineering mother, helpless father, and rich, privileged boyfriend. But no matter the attraction, their lives are worlds apart, and cowboys don’t ride unicorns.

Available for purchase at 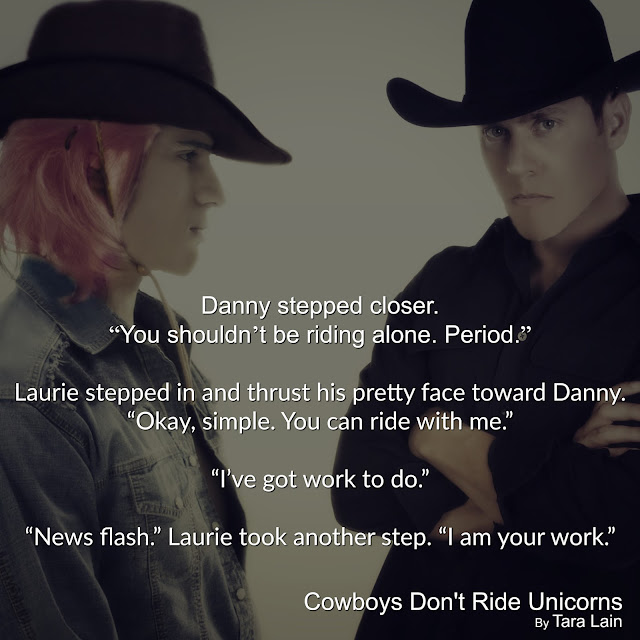 Two hours later he’d drawn his bull—a huge sucker named Scorpion, and from the looks on Maury’s team’s faces, he must have the sting to go with the name. As they walked to the chutes, Maury clapped a hand on Danny’s shoulders. “Careful. Don’t underestimate Scorpion. He’s meaner than piss.”

Danny propped himself on the fence and slid onto the broad back, feeling the heat of the animal under him. He worked with the rope puller Maury had provided to get his bull rope in exactly the tautness and configuration he liked best. Scorpion shifted restlessly but didn’t try to slam Danny against the fence. Danny leaned down toward the twitching ear. “I’m your friend, Scorpion. I’ll make you look good if you return the favor.”

The cowboy closest to Danny chuckled.

The announcer called, “Next up, we got a new rider named Danny Boone. If you’ve been in California lately, you know Danny’s been doing his share of winning. So let’s see if he’s up to the great state of Nevada.”

Danny adjusted his vest, planted his hat, wrapped his hand tight enough to hold but not so tight he couldn’t let go—and nodded.

Fucking hell broke loose. The bull leaped out of the stall in a full breakaway—not a move bulls usually performed. Danny vaguely heard the crowd gasp over his own intake of breath. She-it. Just pretend he’s a bronc. Danny flapped his loose hand toward the sky and adjusted the roll of his hips and movement of his spine to accommodate the bull’s unique style. He spurred for a couple of extra points, but truth was he could barely stay on this sucker. Just try to look good. The hurt didn’t exist—until later.

Scorpion sunfished, throwing his legs to the side, and Danny rode the buck, trying like a son of a bitch to look in control. Wham! All four hooves hit the ground straight-legged, and the impact shot up Danny’s back in a bolt of pain. Much longer and that bell on the bull’s belly would be tolling for Danny. For an instant Laurie’s face flashed in his mind.

After what felt like an hour, the horn sounded.

He waited for old Scorpion to stop spinning, kicked to the side, and landed standing. Scorpion hadn’t taken kindly to Danny’s offer of friendship and took off after him like he’d been given a contract on his life. Danny leaped to the side and let Scorpion sail past. Two bullfighters jumped in front of Scorpion, but the damned bull was hard to distract. He swiped at Danny twice more, getting lots of reaction from the crowd, and finally stampeded after the bullfighters, who lured him into the exit chute.

Danny walked out of the arena too as the announcer said, “Looks like Danny Boone can take on the big dogs with the best of them. Good ride.”

A couple of guys slapped his shoulder, and he nodded. Don’t let ’em see you sweat.

This is the second book in the series by this author but you can easily read it as a stand alone. This is about Danny, a ranch hand and rodeo star who works for Rand and Kai (from book 1) at their ranch. I liked that Danny was a rough and tough cowboy. He is pure alpha maleness but has a fond spot for the pretty boys. He likes his dates a bit on the femme side.

Laurie and his current boyfriend show up at the ranch for a week of horseback riding and sight seeing. His boyfriend is an a$$ and everyone sees it. Danny is drawn to Laurie and his beautiful good looks. Both Danny and Laurie have troubled pasts and neither feels they are worthy of each other.

It's amazing what happens when you happen to find "the one". The one who likes the same things as you. The one who gets your lifestyle. The one who supports you no matter what. The one who makes you feel loved. Yeah...that's Danny and Laurie.

Some stress, some angst, some super hot sm3xy stuff, and some great humor, made this a good read. I look forward to more by this author. 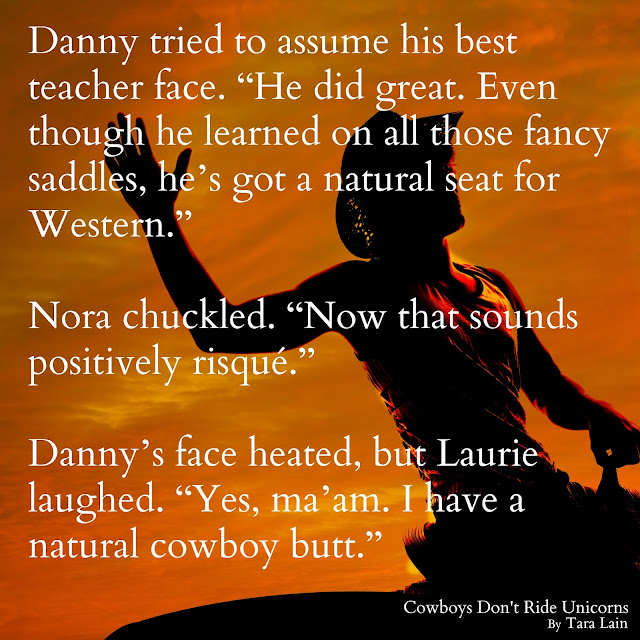 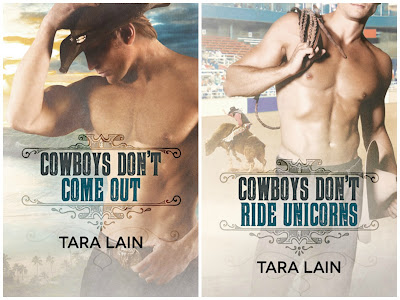 Available for purchase at 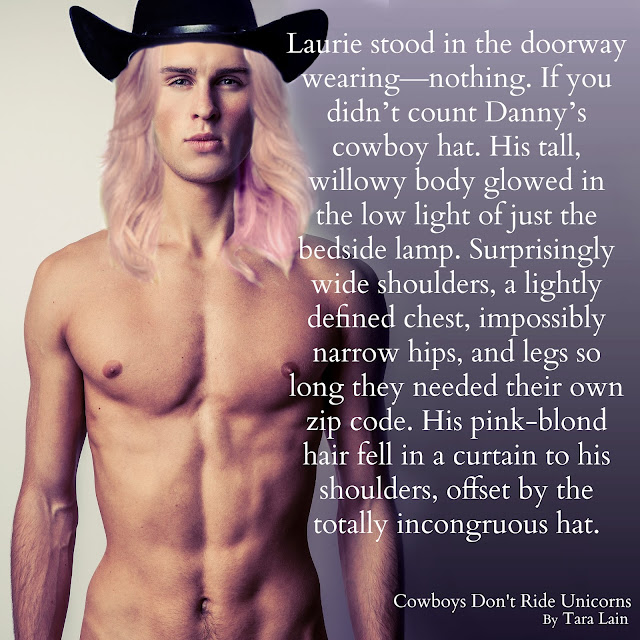 Tara Lain writes the Beautiful Boys of Romance in LGBT erotic romance novels that star her unique, charismatic heroes. Her first novel was published in January of 2011 and she’s now somewhere around book 32. Her best-selling novels have garnered awards for Best Series, Best Contemporary Romance, Best Paranormal Romance, Best Ménage, Best LGBT Romance, Best Gay Characters, and Tara has been named Best Writer of the Year in the LRC Awards. In her other job, Tara owns an advertising and public relations firm. She often does workshops on both author promotion and writing craft.  She lives with her soul-mate husband and her soul-mate dog near the sea in California where she sets a lot of her books.  Passionate about diversity, justice, and new experiences, Tara says on her tombstone it will say “Yes”!

You can find Tara at Lain 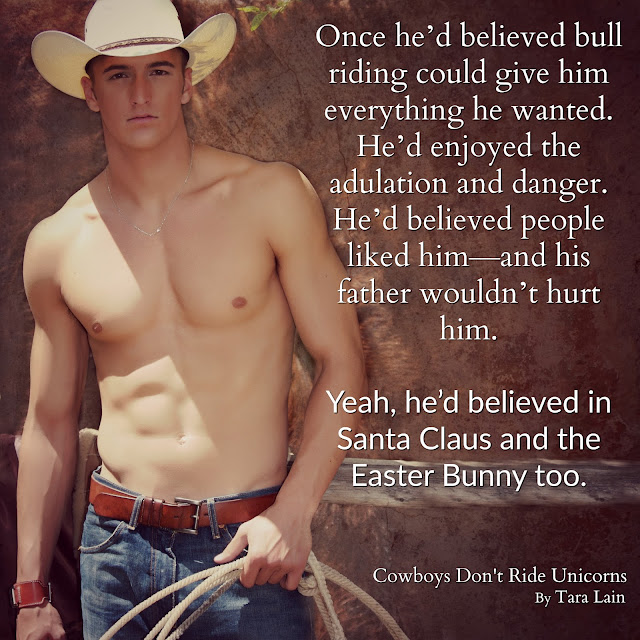 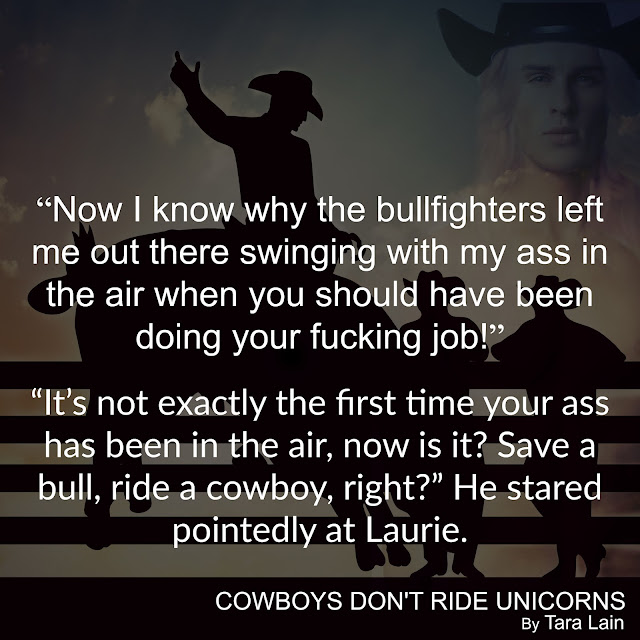